One thing that's been really interesting is watching the way certain video game concepts have become a part of our normal discourse. Among my friends and family, if I say that a particular exercise or a certain task "leveled me up," they know what that means: a sudden burst of personal growth brought about by experience. This one hasn't quite reached critical mass in the public at large, I think, but if you describe something as a "power-up" that has a similar meaning, right? Only in that case it would usually refer to a consumable or wearable item that improves your abilities in a temporary way.
This is all very cool, but I think there are a lot of useful video game concepts that haven't reached popular awareness, but should. Here are the beginnings of a list (I will likely think of more):
1. Hammer Bros. Suit

What is the hammer bros. suit? In Super Mario Bros. 3, there are a number of power-ups that take the form of little outfits. The tanuki suit (or raccoon suit, if you're not cool and Japanese) lets you prolong your jumps with your raccoon tail, fly with your raccoon tail, and also become a statue for some reason. The frog suit is good for swimming and terrible for everything else. The power flower gives you fire, in addition to changing the color of your outfit. However, once you get the hammer bros. suit, there's really no going back, for reasons best described by the video above.
What the term "hammer bros. suit" should refer to: Any possession or version of a thing that makes everything else look like shit by comparison. It's not just the best thing, it's the only one you'll ever want once you've tried it. Hammer bros. suit could improve our discourse by replacing "pure crack" in many cases, because -- like most of the things we use "pure crack" to describe -- the suit won't kill you.
Use it in a sentence: "The new John Deer riding mower is the hammer bros. suit of lawn-mowing solutions," or, "Kobe beef is the hammer bros. suit of edible cowflesh," or, "Once you go hammer bros. suit, you never go back."

What is a sewer level? Sewer levels are constantly included in RPGs, and it's not clear why. On the one hand, sewers are just about the only thing in modern life that looks much like an actual dungeon, but on the other hand, no sewer level has ever been fun. They're sometimes used as training grounds (i.e., Final Fantasy XII) and sometimes as the backdrop for a wildly implausible and tedious murder mystery (Xenogears [which, by the way, has several sewer levels]) but they are never, ever less than tedious.
What the term "sewer level" should refer to: A genre convention or tradition that brings no pleasure, being included simply because it's the way things are done.
Use it in a sentence: "Men in Black II was pure sewer level, dude." Or, "That presentation was totally joyless: one awful sewer level after another.
3. Water Temple


What is a water temple? A water temple is a specific case of the sewer level: a genre convention that not only isn't fun, but has become actively painful. This is named for the water temple in Legend of Zelda:  The Ocarina of Time, a stupidly elaborate puzzle level that made no sense, hated you, and -- if you made a mistake -- often had to be completely restarted.
What the term "water temple" should refer to: A genre convention or tradition so rancid, it actually degrades the quality of human life by its very existence.
Use it in a sentence: "The water temple of female circumcision must end -- cultural relativism need not blind us to the occasional flagrant stupidity of other people."


What is grinding? If you understand the concept of "leveling up," grinding should come pretty easy: in many a poorly-designed RPG, there comes a point where you have to walk your guy around in circles, fighting the same three monsters again and again, in order to grind for experience, which is, in turn, how you grind for levels. You have to do this because the game was poorly balanced. You can also grind for money, grind potions, grind whatever: the point is that you do a boring, repetitive task for an unreasonable amount of time, often to get something you don't really need.
What the term "grinding" should refer to: Life is also poorly balanced, which means that we frequently find ourselves grinding. The term probably comes, in fact, from the concept of "the daily grind" -- most jobs being, after all, a boring, repetitive task performed for hours at a time in hopes of winning money and health insurance. It should be easy, then, to popularize the more general use of the term: one can grind for knowledge, for money, for fruit, for whatever.
Use it in a sentence: "Man, I been grinding math all night," or, "Hook-up artists believe in grinding women. And I don't mean that in the obvious sense, though also, I do."
5. Warp Zone


What is a warp zone? A warp zone is, in Mario games, a secret room full of shortcuts: arguably the first warp zone is in world 1, level 2 of the original Super Mario Bros., where you can run on top of the level's ostensible ceiling at the level's end to find three pipes, each of which will allow you entry to the 2nd, 3rd, and 4th worlds respectively. Warp zones are more about who you know than what you can do, because they historically rely more on gossip (first on the playground, now online) than skill.
What the term "warp zone" should refer to: In other words, the warp zone is a perfect metaphor for the vortexes of nepotism and naked social climbing that exist just behind the scenes in nearly every human organization: once you find a way in, you can bypass years of effort and training. However, without this preparation, you are often under-prepared and overwhelmed, as when Mario goes to World 4 too soon.
Use it in a sentence: "The young man's private dinners with his employer became a warp zone to success: however, his new opportunities would soon prove overwhelming." 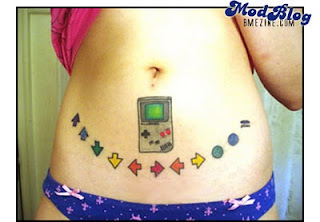 What is the Konami code? Simply put, the Konami code is what makes it possible to beat Konami games, especially the notoriously difficult Contra series. Using this code in Konami games generally unlocks gigantic numbers of lives and other perks. If the (totally awesome) abdominal tattoo above isn't clear enough for you, the code is: up up down down left right left right b a start. This code also works in a number of other places where geeks have power, such as Facebook -- because, as this article makes clear, nerds like to pretend we are always playing a video game.
What the term "Konami code" should refer to: Any brief, easily-expressed bit of knowledge that could make the seemingly impossible entirely possible. For instance, bear survival tips! (If you see a polar bear, give him a Coke!)

Use it in a sentence: "Never use Comic Sans MS in a professional context: this is a Konami code for life."
Posted by Mike Meginnis