Okay, yes, everyone has seen this video game adaptation of The Great Gatsby, but I keep coming back to it. Tuesday night I went to the release party for Orlando startup publisher Burrow Press's first fiction project, Fragmentation, and discussed the game with local writers Tod Caviness and J. Bradley. Sarah called while I ate appetizers full of strange meats and tomatoes and told me she was playing the game, with trouble. "There's jumping," she said. She is not great at jumping in video games. Who is? Anyway that night I went home and played it myself. You leap around, dapper in your brown vest and more dapper in your powered-up gold suit, flinging your hat at butlers and flappers, and after you find Gatsby at the close of the first level's courtyard you transport to a boxcar train plowing through the Valley of Ashes, at the end of which you face off against an enormous pair of floating spectacles. Well, my patience ran out about there.

The game includes only a tiny bit of dialogue, in the style of old NES games, and the first we get is something like, "Good job, old sport!" The "promotional materials" offer a little more in the 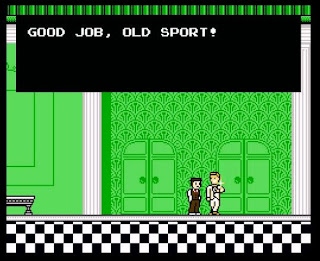 way of colorful writing ("You're not in the middle west anymore, son. Welcome to Wild West Egg.") and repetitions of the "old sport" phrase. What a strange, wonderful phrase. I began and (sort of, probably) abandoned an endeavor to deploy it in casual conversation and record the results. I even wrote a poem called "Old Sport," in which the speaker is the video game caricature of Nick Carroway, and would post it here except that maybe I'll actually send it out into the world.

Of course, in the context of Fitzgerald's novel the phrase immediately makes us think of Gatsby, and I wondered what other recognizable dialogue fingerprints are floating around in books. Do authors go into new projects with clearly allocated phrases for each character? Do they hear each voice clear and bright before it even touches pages, or do they go back through chapters of dead dry speech and punch it up with weird turns, awkward fumbles, new cadences? I would love to answer this question for myself but I've used every technique I can think of to angle my characters' speech, and keep developing new ones. I know in one recent project I got to the end and thought, This woman says "I mean" too much. But I mean, I know people who say that in almost every conversation. Is it better to keep the dialogue true, or artful, or balanced? I don't know. There is no answer, only endless voices, endlessly messed-with wording, syntax.
Posted by Tim Dicks