Book review: What I found in two of Dennis Cooper's 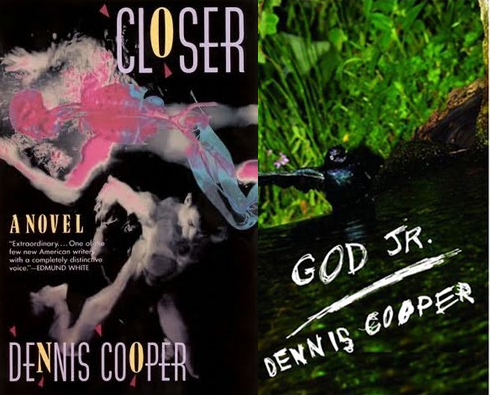 Tracy and I got library cards on Saturday. We had been meaning to do it for a week. The Iowa City library (there is only one, apart from the university's, which in all fairness like half the city's population is using) is a nice building and I might take a page from Tim's book and review the library sometime. The library cards themselves are an outlandish yellow that defies comparison, like police tape baked into a lemon pie. One side is completely blank -- meaning totally yellow, the sort of yellow that reflects onto your skin, which then reflects it back, if you're as white as I am -- and the other side has my name.

The library's collection is pretty solid. I actually felt like the comics section was a bit thin (probably because those really circulate: even as librarians grow their comics collections, more kids come to take them away) but the fiction area takes up most of the first floor and as a result I found at least a little work from everyone I looked for. They only had Blood and Guts in High School as far as Acker goes, which is the only Acker book I've read, but they had Ablutions and several Percivel Everett books and several David Markson books (I started with The Last Novel because it seemed like the wrong thing to do; and it still seems that way now, fifty pages in).

They had several Dennis Cooper books. I went with Closer and God Jr. They had The Sluts, but I didn't feel up to borrowing that one on my first visit to the library, even if they do have a self-checkout for people who can't look the fresh-faced young checkout girls in the eye while borrowing whatever filth it is they want to borrow.

I like Closer. You can Google it to find out what the book is about. I am here to review the things I found in this library copy of Closer. On the blank backside of the last page in one of the chapters there is a dark red crusty thing sort of stuck there. It's in the shape of a sideways apostrophe. I think it might be some blood-infused snot or some crayon wax. It might be food; I'm not sure. It's in the bottom-right quadrant of the page. Sometimes you want to read this sort of thing as an insult but this one is so hapless. I don't know what to make of it really.

This library apparently tapes down French flaps really snugly so you're not even sure they were ever there. Then if there aren't French flaps they put the transparent tape down on the inside cover where the flaps would be if there were flaps. Under some of this tape on the inside back cover there's this single blue dot of ball point pen ink. The library put it there. This one does look intentional just because they taped over it, but I don't think it was.

The star of the book, in terms of library patron leavings, the star of the book is definitely a two-page spread featuring some sort of weird payload in the fold at the spine. A sufficiently thin item, no matter how weird, is invisible in a book until you open to the right page. When I turned to these particular pages I saw what looked like a bunch of red eraser shavings in the spine. But I don't think they're eraser shavings. They look more organic. My next thought was pot, which probably tells you how much pot I have personally handled in my life. (About enough to confuse it with bits of eraser.) It would fit with the book. Are those "really sweet buds" I've heard so much about a shade of red? I couldn't figure out what they smelled like so I spent like four minutes smelling it. Results: Inconclusive.

God Jr. is in many ways the less conventional book (it culminates in a probably-hallucinated video game adventure, which is way more incredible than whatever you're thinking) but it had the more typical entries into the genre. You can tell right away from the edges of the book that it's had something spelled on it. The question -- and I was in suspense about this for most of God Jr. -- was what that "something" was.

Come page 158, I found out: it was coffee. It's always the exact same shade of brown. The paper you spill it on doesn't really seem to matter. (I spilled some on the cover of my APA Style Guide the other day and it came up nice without fucking up the pages except on the bottom edge of the book, which I now sort of hide because the guide is actually company property and I feel like a jerk.) As you flip back from page 158 the coffee stain comes into focus. It surrounds the text -- is actually weirdly careful to avoid staining the actual reading area of the page.

The mystery of this stain is that when you finish the book and turn the last page over to confirm it's really over, it turns out not to be coffee. Understand that I worked at a library for years: I know what a coffee-stained book looks like. There are no variations. The pages even wrinkle in the exact same way, often taking a specific shape such that they tend to stick together even when the sugar is gone. This stain has a shit-colored powder crusted on it. I don't know what it is. I guess the simplest explanation is coffee grounds. We might also consider some grandmother's ashes.

This will be an ongoing series.
Posted by Mike Meginnis