Screenshots for my fictional video game Legend of Silence.

So I think I mentioned my story "Navigators" was published in Hobart 12. It's a story that focuses on a fictional video game called Legend of Silence; Matt Bell was kind enough to write a close reading here that will give you a good sense of it. Here is the first paragraph:


After they found the metal boots but before the dirt clod, Joshua’s father bought graph paper at Wal-Mart. Unfurled and pinned up on the wall where his mother’s family pictures had once hung, it stood six feet tall by seven feet wide. The paper was hung in three rows, each printed with thousands of small gray squares. If Joshua crossed his eyes the squares seemed to rise from the page. “It’s time we started a map,” said his father. “Or we’ll never finish this game.”

Having read the story, Dave Wells (friend of Tim Dicks, twitterpal of mine, artist) took an interest in the story. Some time later, he made some Legend of Silence art -- a total of four pieces. The first three were screenshots. You can go to Dave's DeviantArt account to see more of his art; recently he's been doing a 30 Days of Creativity project, which was part of the impetus for his Legend of Silence screenshots.

There's a lot of detail in these, and you can tell that Dave paid close attention to his sources -- both my story and the games on which he based his sprites. Here is the first he posted: 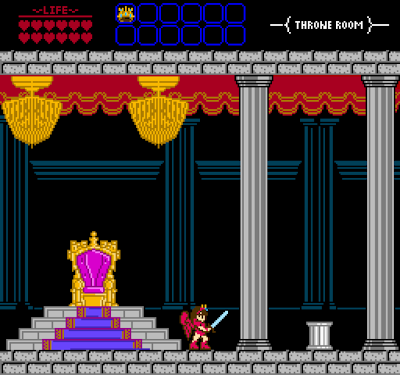 Dave's description: "The beginning of Legend of Silence, when you must relinquish your crown and begin your quest. Press B to drop your crown."

The relevant bit of the story:

“We’ll use sixty-four squares for every screen,” said his father. “That’s eight by eight. Starting here, in the middle. Here.” Using a red marker and a number-two mechanical he sketched the first room of the labyrinth; its gold-and-velvet throne, its many crystal chandeliers, its candelabras. At the right edge of the chamber he drew a purple pillow on a white pedestal where the heroine would lay her crown to rest if you pressed the B button. This opened the exit, which led to the next room. Joshua’s father drew this from memory because they could never see it again without restarting their game. Once you left the throne room, the guards wouldn’t let you come back. They did not recognize their queen without her crown.

“If we map the whole world,” said his father, “we can stop getting lost. Then we’ll really get cooking. We’ll be through in a month.” There were, his father had said, maps you could buy. But this would defeat the point, which was the journey.

Dave represents Alicia with only one piece of equipment: her golden crown. It's so cool to see the throne there, and I really like Dave's approach to the chandeliers. 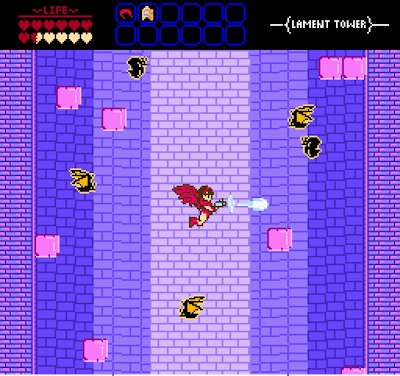 Here is Dave's description: "Scaling Lament Tower to get the Lead Boots. What do the boots do? Avoid the plague bats to find out!"
Here is the relevant text from the story:

Alicia was not only a queen in the beginning but also a bird girl. She had large brown wings speckled with flecks of silver and white. After her crown and throne room, these were the next thing she gave up. She flew to the top of a very tall room (eight squares by fifty-four on the map) and found a door leading to a smaller room, a single screen, housing the metal boots and otherwise empty. These boots sat on a white pedestal like the one they had given their crown. At this point in the game father and son did not properly understand its principles – they thought the throne room was an interesting fluke. Joshua’s father had made Alicia step into the boots. They couldn’t tell what the metal boots were supposed to do. Joshua’s father led Alicia out of the room, and he made her jump out into the emptiness of the very tall room. She fell to the floor, flapping her wings without effect. The weight of her boots was too much. Her wings bent and warped from effort as she fell through seven screens. Then she crumpled on the floor, half-dead, and enemies nosed her body, gnawed, and further drained her life points. Her wings would slowly atrophy from disuse, shrinking, curling inward, dropping feathers in clots for the rest of the game, until there was nothing left. These feathers being pixels, of course – two each, twisting and angling this way and so on such that the viewer could see what they were meant to be. Then father and son understood the game. Joshua’s father said, “This is a REAL game.”

I really like the bats Dave drew here, and Alicia's expanded wings, and the gun as well. When I wrote this story I was generally thinking of Metroid, and in this scene I was thinking of the experience of climbing the endless vertical rooms that were so often so very frustrating. You just know, looking at this screen, that if one of the bats touches Alicia, she'll fall, probably all the way to the bottom, probably blinking rapidly the whole way. Then she'll have to start again. Very sadistic. Very NES.
Dave doesn't list it as a source, but the way the shades of purple in the background relate to each other reminds me of Kirby's Adventure, especially the classic Butter Building levels.
Here's the third image: 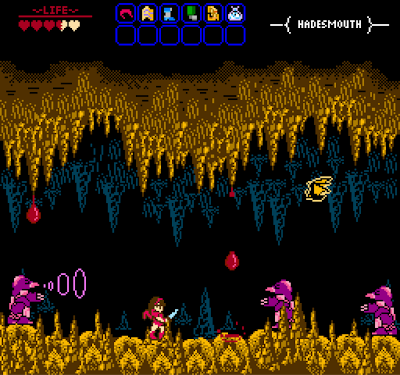 Dave's description: "Legend of Silence, part 3! The lower-right area of the map is Hadesmouth, layer of the dreaded and kleptomaniac Lindworm! Some speak of a treasure behind it fit for King Arthur... but beware the Molemen territories!
I have enjoyed doing these NES mockups. I have a lot of respect for the olden day sprite makers of the 8-bit era. So much damn detail and experimentation to do this sort of thing. To them, a hearty salute."
The relevant text from the story:

Once they were up until two in the morning exploring the dark caves in the bottom right corner of the map, which were riddled with hungry purple mole-men and waxy stalactites dripping fat drops of poisonous water. The boss of this area was a worm with sticky skin, which collected various enemies and hazards – spikes, mole-men. Joshua could not kill the worm because without Alicia's wings it was difficult to leap over the many differently-shaped obstacles that clung to it. Joshua's father pulled him into his lap, took the controller from his hands, and finished the fight with her sword. In the next room there was only darkness and a large blue stone. They thought they would have to leave their sword there, a gift for King Arthur. When Joshua's father pressed B, Alicia struck the stone instead, which shattered the sword, leaving only a small length of blade, and the hilt. The exploded fragments hung twisting in the air like stars or a junkyard mobile.

The mole-men in this shot are really funny to me because they're probably the closest of anything in these screenshots to matching what I pictured. I mean, truly dead-end again a very NES detail, the sort of monster you don't see in games anymore. It's entirely possible that these dudes are the toughest bad guys in the whole game.
We can also see Alicia's wings have indeed withered, that her equipment includes the metal boots (as well as many other exotic items). Her sword has been shattered and shortened, as described elsewhere in the story. Things are getting desperate.
Dave's fourth piece was not a screenshot, but box-art: 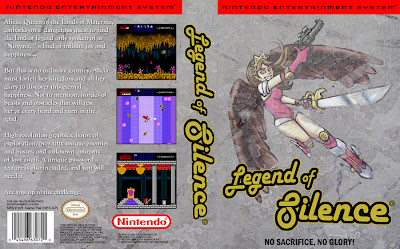 Dave's comments: "The coup de gras of the Legend of Silence pieces. I couldn't let a box art slip by! I do enjoy the fact that some NES games got a weird spin on things. For example, Phalanx. The box art has nothing to do with the game. I went with that this time."
It's worth clicking this one to see the big version and read Dave's advertising copy on the back. Both the art and the copy are clear examples of a marketing department straining against what they've been given to work with. Legend of Silence as described in "Navigators" would probably stop being fun after the first couple hours, but the box has to convince us otherwise, and its efforts to distort the truth are admirable.
It's hard to say much else because I am perhaps comically overwhelmed with gratitude for this, which is the first fanart I've seen for a literary short story (though I'm sure there have been others). The art is so convincing, both successfully imitative and engaging in its own right, that it makes me feel as if the game I wrote about is a real one. Now I sort of want to play it, even though, as I say, I'm pretty sure it wouldn't be very much fun at all.
Posted by Mike Meginnis