One nice thing about being home for an extended period of time is that my parents tend to give me jurisdiction over which movies we watch (though not which TV shows we watch--I've been subjected to a nearly endless stream of Ice Road Truckers and How It's Made). They also seem to create situations in which my favorite childhood movies are playing, and the test seems to be how long I will resist watching with them.
Yesterday's test was An American Tail. I'm not sure I was in love with the movie when I was young, actually--my appreciation for it is new, and it's an appreciation enhanced by my realization that Don Bluth was also in charge of or central to several other pretty fantastic kid's movies--The Rescuers, The Fox and the Hound, The Secret of NIMH, The Land Before Time--and some others that may not be truly great but that I'd argue for--All Dogs Go to Heaven, Pete's Dragon, Anastasia, Titan A.E. They all tend to share some characteristics that I think are worth noting as tools for fiction, but what really interests me about them is their commitment to a few key deviations from standard kid's fare. This is particularly important to me to the extent that I'm a writer of fairy-tale or fable fiction, and to the extent that I prefer fiction that creates a specific world for itself rather than assuming a common understanding of the real world. Mainly, I find, Don Bluth films create their reality and make it matter by tapping into different sources of fear than are traditional.
1. Don Bluth films treat as real the problems of material lack.
Don Bluth films are rarely populated with characters who are (legally and ethically) wealthy or even characters who are generally comfortable materially. Problems of money, and usually the problems of material security that they cause, are usually what initiate and constrain the plot--Fievel's home is burned, Mrs. Brisby's home is about to be destroyed, the dinosaurs have no home. The characters often express a particular problem with money, too--Mrs. Brisby has to rely on the generosity of the local doctor to get medicine for her child--but money is abstract while poverty is not. Don Bluth films tend to make the ultimate problem of poverty visible by depicting characters with shabby clothes, insufficient shelter, and little food. Disney fails to really approach this--Aladdin has some patchy pants, but he owns a pet and lives in what looks like a pretty nifty loft overlooking the city. 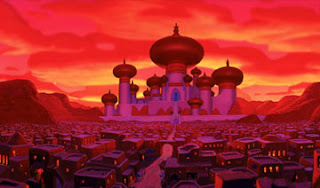 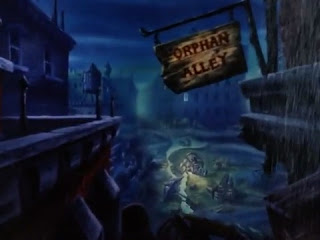 This is an important one because a lot of modern literary fiction attempts to play on poverty, but without making it visible. Characters may be unable to find a job, or unable to afford medication, but rarely do they lack food, clothes, or shelter, nor risk losing them. Poverty is difficult to write about because it limits the characters' options, of course--characters who are starving don't really have a lot of psychological choices and decisions to make; they don't need to make life changes, they just need to eat. But often these are productive constraints. It is only when Fievel lacks all his caregivers and all his options for housing, for instance, that he begins to question his family's love for him, and the strength of their bond; this is the strongest character movement of the film. It ends up more powerful because Fievel lacks everything material and opts to give up something spiritual as a result.

Which leads me to...
2. Relational Breakdown
Structures like family, friendship, and love tend to resist breakdown in even the most soul-searching literary fiction, just as they do in Disney movies. There's nothing wrong with painting the strength of interpersonal bonds, but Don Bluth films do seem to improve by questioning and risking the breakdown of strong relationships. One character detail that impressed me this time in An American Tail was the resistance of Fievel's father to his daughter's faith that Fievel was alive. He's lost his son on the ride over to America, and for him, letting the bond quietly decay is apparently easier than holding out hope that it will be restored. Even when he receives word that Fievel is indeed alive and must be somewhere nearby, he maintains that it could be "some other Fievel Mousekewitz." There is rarely this danger in other children's films--a bond may be tested, weakened, or temporarily undermined, but it is unusual to see characters willfully and independently release their ties to others. Often it is someone else who has gotten in the way, and once they are eliminated, so is the relational disturbance. 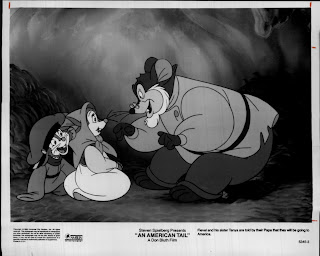 Some literary fiction has the opposite variety of risk-aversion, in that you'll see a breakdown without a corresponding relationship. Divorces, affairs, estrangements, etc. will occur, often with major consequences--but without any sense of how strong the bond was to begin with. For a breakdown to matter, we have to understand that, however distant things are now, there was a time when the bond was strong and personal. Often the problem here is one of assumption, too--writers assume that because something takes place in the real world, there's no need to specify what a bond was like when "we all know" that families are close, that fathers and sons share special bonds, that people get married because they're madly in love. It would seem like these things could be left to assumption, but they just can't. Assumption is not strong enough to sell real love. And so An American Tail makes the degree of its father-son bond clear and specific--if you watch the beginning, you can tell that Fievel is, in all honesty, his father's favorite kid. He dotes on him. He rests hopes on him. Their bond is not unusual--it's just specific, and so we know what they've lost when, on both sides, that bond breaks down.
Believe it or not, I've got more, so I'll make this a two-parter. And as usual, I'll add my disclaimer: It's not that I find An American Tail to be a true masterpiece or work of art, though I will say that my standards for "masterpiece" are kind of nebulous and non-commital; I don't like calling anything a masterpiece, because it inevitably rips the title from other things that are just as well-executed, just as important or valuable or necessary. Any criteria seem insufficiently rigorous to me. So I generally opt not to draw the distinction, and try to learn from all sorts of things, especially things that I've failed to look critically at in the past--being a kid and all. Works of art or not, I know these films are still in there, and that they've influenced me. I like to speculate on how.
Posted by Tracy Rae Bowling