Why (When) Subtlety Doesn't Matter

I saw Extremely Loud and Incredibly Close this weekend. As the reviews have said, it is not a masterpiece. It is not a very special or important film. It is nominated for an Academy Award probably by default--nothing else hefty enough to stand up to their kind of recognition.

I do not think, though, that this movie is an F, a fanciful failure, or a manipulative mistake. I think that EL&IC is as sentimental and contrived as any other movie that could stomach Tom Hanks cast as a dead father, and as sit-throughable. Again, it's no masterpiece. But the things that are getting attacked about it seem really artificial.

Many people call out the annoying obsessiveness of the main character, his insistence on doing things a certain way, his histrionics when the emotions catch up with him. I think that the movie is aware that his behavior is objectively annoying, and that it spends most of the film trying to get us to acknowledge that this behavior is sort of necessary and that we need to be able to understand it and forgive it. The movie is kind to him, but it doesn't take pains to always view him through the most loving lens. It does sort of conveniently forget that minor characters in the story have independent lives and that this kid's force of personality wouldn't necessarily occasion the kind of outpouring of kindness and acceptance it gets. But this is a common fault among ostensibly artier, more subtle films. I'm supposed to believe that an entire town actively and with the utmost kindness encourages the relationship between Lars and his real girl? Ryan Gosling's believable sweetness and need does not make the contrivance here any less believable. You must choose to overlook this much if you want to even finish the movie. Is a kid developing an intricate system for decoding what he thinks is his dad's last message for him any less of a stretch? Is that kind of obsession really so unbelievable? 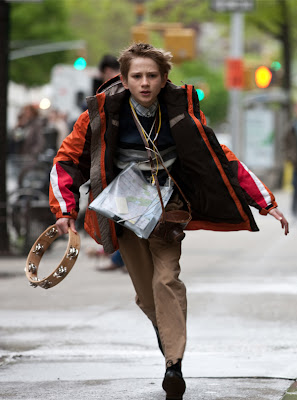 In my MFA program, obsession in fiction was typically viewed through a bifocal lens. On the one hand, people noted, a character has to want something pretty bad to even get a story to happen. On the other hand, people don't usually go to the kinds of lengths that, say, Oskar Schell goes to, and so, the argument went, care should be taken not to strain the audience's credulity too much. But this argument often hinged on the idea that real people do basically nothing about anything, that humankind's true state of being is just a kind of extended sitting on the hands. This led to a lot of stories about nobody doing anything, the kind of strict domestic realism that most of us who want to consider ourselves innovative strive to avoid. The trick for an intelligent artist was, I think, supposed to be to maintain a very tentative balance, where there was some essential sort of wackiness or whimsy, contrivance, about the story's conceit but the execution of that conceit was roughly as difficult or messy (or, if you really wanted to capture the slow, grinding machinery of society, plodding or inconvenient) as it would have been in real life. Oskar Schell's efforts are not really ever hindered by time, distance, practicability, or interference from others. But I really don't think that makes them less real as an expression of grief, anger, confusion, and bereavement. I think the real thing about EL&IC that's sticking for artists and critics is that it does not subscribe to the notion that the truth is subtle, undramatic, and hard to access.

Fiction, it bears repeating, can never be reality. It represents reality. And the challenge for a writer of realistic fiction is how to represent reality in the most honest and appropriate way. The representation that many critics have taken issue with is the film's direct use of images from 9/11. This strikes them as dishonest, calling up already existing emotions rather than creating its own fictive ones. And it's true that for many audiences, the simple act of reshowing the famous footage of 9/11, of reproducing that day, is creating what can fairly be called a false catharsis. Many people are crying in the theater because of a collective emotion that was quickly and insistently attached to those images by others: These are the towers that represented our prosperity and achievement. These are the towers that stood for our strength and perseverance. This is the day we learned what it was to feel unsafe, violated. When our icons were injured, we all were all injured. This is the day we mourned as a nation. And of course (though usually more distantly), these towers represented real lives, abruptly and needlessly ended.

It would be naive to say that the movie does not rely on and intend to call up those associated meanings. But I don't think it spends near the time on calling up our collective meanings for those images that it spends drawing new, extremely specific meanings for them. For me, all the emotional value of the film came when Oskar Schell crumbled, not when the towers did. For him, the towers falling meant a very particular, very visceral, very final loss. In that moment, they meant the loss of the single most important person in the world, and an indelible, lifelong guilt. The weight of that loss was more incredible than the loss we felt as a nation, and it was humbling, heartbreaking to have this new meaning of the disaster drawn, and to feel even the fraction of its intensity that a story allows. 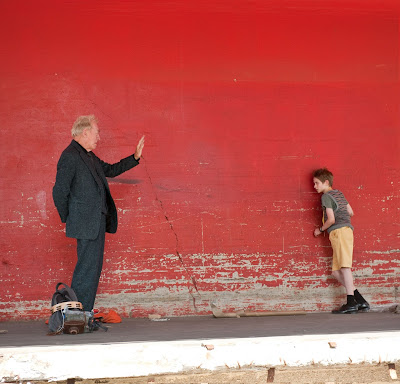 For the majority of us far from New York City the day of September 11, without loved ones there on that day, the measure of a "good," truthful 9/11 story can only be in its ability to provide a window into the very real terror of a city and the very real grief of any single one of its victims. The art born of tragedy can only deliver lasting comfort on the level of individual characters--they may figure out how to move forward in life, but we, collectively, the human race, will never feel "satisfied" by a Holocaust treatment; we will never feel like it's been settled. It is too big to be settled. Especially for our comparatively less tortuous, less decimating, less protracted national tragedy, I do not think it's fair to ask any art made about it to operate subtly, broadly, with the intent of representing our much quieter feelings of collective grief and terror. If we can't derive enough meaning from glimpsing the depth of one person's suffering--and suffering is a loud, sloppy, pathetic, unsubtle thing--if we demand that stories put words to how we all actually feel instead of how individuals might feel, we'll miss a lot of what fiction can do for a society. The only truth worth telling about 9/11 is its cost in individual human suffering. The only lesson worth taking from a story about 9/11 is to become generous in our response to individual suffering--generous enough to break our taboos about letting people into our houses, about participating in their rehabilitation. The argument that this is not what really happens is a weak one. Some of the most valuable fiction is about what could happen. What should.

This movie is saccharine, and it probably won't change your life. It is missable. It probably doesn't deserve a major award. But it's a working story. It's affecting. And if you set aside the notion that truth is by necessity quiet, private, hidden, it carries some valuable truths--easy to name, but also easy to forget.
Posted by Tracy Rae Bowling