So Tracy and I have a tradition of drinking a little and watching Netflix on the weekend. This tradition is, as I understand it, extremely unique. I will admit that I am personally maybe a little more fond of the whole "awful movie" experience than is Tracy, so much so that I enjoy simply reading about them. But the truth is that a lot of the things I legitimately enjoy, television-wise, are legitimately not good--and that I don't let that stop me from loving what I love. Life's too short to go without Jackie Chan Adventures.

Speaking of which, we'll start with Jackie Chan Adventures: 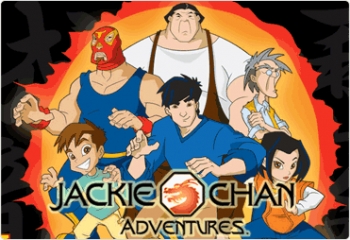 Okay, so, let's establish one thing right away: those jerks on the left? The luchador and his weird little friend? They're barely in the show. Which is important, because I hate them.

The rest of the show, though? Pure gold. In terms of "so bad it's good," you've got Jackie Chan's involvement in the show. There's live-action footage of him sort of frantically running around cut into the otherwise totally reasonable theme, and he gets a producer credit, but it becomes pretty clear pretty quickly that he had essentially nothing to do with the show: the cartoon "Jackie," who is voiced by another dude (who has apparently made a career of sounding sort of like Jackie Chan; he also plays Chan's character in the Kung Fu Panda TV show), doesn't actually look at all like Jackie Chan. (I'm not sure if we should be insulted that they didn't think we would notice.) Basically, the Jackie character is an archaeologist with a magical uncle and a tricky niece and together they help the government fight demons.

The show is harmless and sometimes pretty funny. It benefits from the fact that I used to watch it with my little brothers when it originally aired (2000-2005). We were home-schooled and I was too old for the show but we spent a lot of time at home alone. Uncle is definitely the best character. His catch phrases are: "Jaaaackie!" and "One more thing!"

Being drunk incapacitates just enough of my brain that the rest of it can enjoy the show without any irritating feelings of self-consciousness.


Okay but here is all you really need to know: PAINSTAKINGLY. ROTOSCOPED. TITTIES.

There's actually, if you're in the right mindset, a lot to like about Fire and Ice. I have a real weakness for watching hopeless, obsessive artists chase a bad idea as far and as hard as they can, which might as well be the tagline for Fire and Ice. Their sheer attention to detail in rotoscoping those jiggling breasts represents the sort of calm, careful dedication I hope to bring to my own work. The fact that most of the story is purely a function of what some artists thought would be awesome to draw is pretty cool, really. And at least the guys in the movie are pretty thoroughly objectified at times, too.

But, okay, really, it's so bad. It's racist in a way that makes you feel bad for even noticing how racist it is, and it's nasty and ugly and mean, and the rotoscoping meshes terribly with the environments at times and always has that eerie wrongness endemic to rotoscoping, and the exploitation is just too much. If you've got to watch the weird, deeply compromised passion project of a mad animator, The Thief and the Cobbler is probably the way to go.

Now here is the only scene I remember from 2 Fast 2 Furious:


It's sort of gloriously stupid taken out of context, but the context makes it especially bad. What you have to understand here is that this is a moment of triumph for Suki. She's not winning their fateful illegal high-stakes street race, but she's getting second place after pulling off what is clearly the most totally bitching jump of her life in a sweet pink sports car. And what does she shout at the apex of this totally rad jump? "SMACK THAT ASS!" It's as if she's having some sort of religious conversion experience, submitting to the will of the universe (which she apparently imagines as a dude who is having slightly rough sex with her). After this race, the point is further underscored by the fact that she decides to settle down and devote herself to looking pretty next to Snoop Dog. (At least, that's all I remember her doing after this jump.)

And, another one from my childhood, Spider-Man and His Amazing Friends.

This one is like Jackie Chan Adventures but without good jokes or even slightly compelling action. Instead, it has one of the flattest interpretations of Spider-Man ever, an ice guy, and a girl who shoots fire (and flies).

We might get into individual episodes in a future post, but I think the main thing to know right now is the gleeful '80s logic of the characters' powers. Like everyone in '80s cartoons, these guys never just shoot their enemies with an ice beam or bathe them in terrible flames. Spider-Man rarely just grabs a thing with his webs. Instead they like to get creative. Ice-Man recently made a giant set of ice stocks to trap a multi-headed monster. Firestar doesn't, like, melt your face: instead, she makes a ring or cage of fire around your body. Spider-Man, meanwhile, can instantly sculpt umbrellas, nets, shields, and all manner of weirdness from his webs without any apparent effort. They come out of nozzles strapped to his wrists! The nozzles have an on-switch, and that's it. How does he do this? Is he a magic Spider-Man? Because that, and nothing else about this series, is preposterous.

Spider-Man and His Amazing Friends is another weird, fun thing from my childhood. Back in the days of VHS tapes and no money, it was pretty common to find a bunch of awful, ancient animation in Wal-Mart bargain bins. And sometimes, in those bargain bins, there were superheroes! That was all I needed to know. We would buy one or two of these and watch it like ten million times. I've spent a lot of time wondering why Ice Man and Firestar were both so comfortable with the idea of calling themselves "the Spider Friends," and now, because of Netflix, I get to ask myself all over again. My theory? They are way, way less marketable characters. #brandingbaby.

There are like a million more but I'm tired. Next time: Other things! Many of them worse than these!

Also, you can now get the PDF version of issue 0001 by sending us $3 or paying with a tweet. It's a good, low-risk (or no-risk) way to preview the magazine and confirm that it's exactly as awesome as you always suspected: although the print version is, honestly, more attractive and more fun.
Posted by Mike Meginnis