Mass Effect 2: They Don't Know, But I Do Know, that I Know I'm Not Going to Die

A lot of commentary on video games surrounds death -- the anxiety it causes, the strangeness of the countless deaths enabled by gaming's use of "extra mans" -- but we are so often uncommonly safe in games. We are safe from death and we are safe from our own feelings. Just as Fallout 3 was three games (Atmosphere, Mediocre FPS, and Dialog Tree), Mass Effect 2 is really two games: Gears of War Lite, a cover-based tactical shooter wherein you occasionally stop sniping dudes from behind crates to shoot a fireball at them, and Dialog Tree, a game wherein you talk to people and aliens and robots until they give you what you want. In Dialogue Tree, all roads lead to your success: it is possible to die in the shooting sections, but not (as far as I can tell) the talky parts. The worst thing that can happen is that you make a choice that will ultimately lead to the death of someone you didn't want to die -- or, more likely, that you will alienate someone such that he will not join your team, or, more likely still, that you will piss someone off to the point that you can't get them into bed. (Mass Effect 2, like all BioWare games of late, is devoted to letting you screw much of the cast.)

The other characters don't know, but you do, that you're not going to die during Dialog Tree. They behave as if the stakes are real, perhaps because for them they are: the other people could die, or could have their lives destroyed, or could miss out on a dream, if you make the wrong choice -- or what would seem to them the wrong choice. So whereas the other characters are trying to accomplish things, trying to kill certain enemies or save certain members of their families or prevent certain genocides or reverse the damages of certain biological weapons, you already know that you will succeed, because while failure is essentially impossible in Dialog Tree, Dialog Tree is where all of the important stuff actually happens. The shooting stuff is where the challenge lies but it also doesn't actually matter. 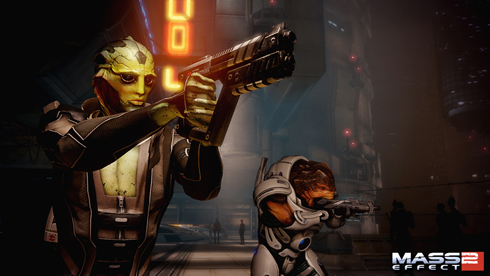 Because you can't fail during any of the important stuff, the question becomes not what you want to do but how you want to define yourself in the process of doing it. Are you a person with cosmopolitan values, someone who values the contributions of alien races as well as those of humanity? Do you like to say what other people want to hear, even if it's probably not true? Are you, basically, a nice person? Then you'll want to use the "Paragon" dialog options. Are you racist? Xenophobic? Brutally efficient, or sometimes even cruel? Do you like telling people what they didn't want to hear? Then you should probably choose the "Renegade" dialog options. Either way you win. The trick is Having It Your Way, being who you want to be.

Paragon options unfortunately often mean kissing ass for no obvious reason; your character sounds disingenuous maybe 33% of the time if you try to play it nice, because people who spend all of their time shooting other people, whatever their reasons, are not nice people. The renegade options are surprisingly plausible, meanwhile, compared to the sort of bad-guy options you get in other games: rather than drowning puppies for no reason, the renegade path usually involves some mixture of harsh honesty and efficiency in pursuit of your goals. It's not that you threaten to shoot the informant in the head because you're evil, exactly, it's just that you're trying to save the universe and you don't have much time. Still, the renegade options are sometimes pointlessly evil, cruel, or stupid. You wonder what would make a person do such things, when what you should be doing is reflecting on the decisions you've made, and their unexpected consequences -- the ones that you should have seen coming.

One stupid feature of the game is that it pushes you to one extreme or the other. If you want to make it through with your entire team alive (which, being the only real challenge the game offers apart from the occasional tricky gunfight, is something you're going to want to do) you have to plan ahead to the point it ruins the game, cheat, or simply always choose the good-guy option or the bad-guy one. If you consistently choose one side over the other, you'll unlock certain special dialog options in certain moments that let you work around certain problems, either by intimidating characters or proposing alternative, unexpected solutions to their (and your) problems. What makes this frustrating is that making difficult choices is supposed to be the point of Dialog Tree, is really what most players are there for, and yet BioWare incentivizes making no choices at all: either you play all good or all bad if you want to get all the best stuff. They are penalizing you, in other words, for playing their game. If I were playing it on the PC, where cheating would be easy, I would do it in a heartbeat: the ability to choose whatever dialog options I wanted at any time would be both more realistic (who checks her paragon points to see if she's allowed to say something nice?) and more fun (then it would be roleplaying, rather than simply another system that encouraged us to manage it on the highest possible level of abstraction and detachment). 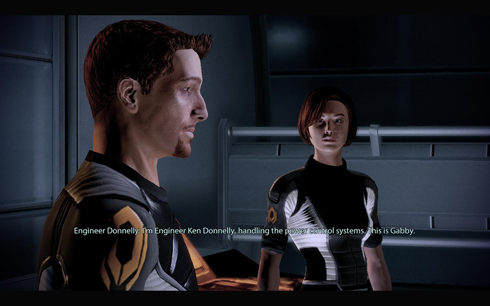 One smart wrinkle that initially seems like a mistake is the way that you don't actually know what your character will say when you choose a given dialog option. You see a simplified menu that gives you a sense, by a combination of spacial arrangement (about which more in a future post) and a couple of choice words, of what sort of subject you'll address and the tone you'll use in addressing it. Beyond that, you don't know what your character will say. Sometimes this means you cringe a little for the wrong reasons (occasionally my character said something painfully sappy without my seeing it coming, simply because I wanted to take the paragon approach) but sometimes it leads to an emotionally interesting surprise. For instance, the moment where I interrogated Mouse.

Mouse, you see, is a small-time criminal, mainly a courier, who served as a messenger for a larger criminal, who ordered a hit on a politician. The would-be assassin Mouse hired is the son of one of your team mates. If you choose to do the quest, you have to get some information out of Mouse. Again, you know that you'll almost certainly get the information you need no matter how you approach the conversation. I chose the renegade option because it had, in the past, led to satisfying and realistic interactions: my character would put her gun to the other guy's head and ask for what she needed. This made sense to me. In the case of Mouse, however, she went a little bit overboard. She shoved him to the ground and stepped on his neck until he was ready to talk. That wasn't what I wanted, but it isn't as if I felt cheated by the game. Rather, I was disappointed in myself.

The game lays it on a little thick at this point. Your team mate reveals that Mouse used to be a bit of a surrogate son to him: cute, sweet, sad, pathetic. And you've beaten him up, sold him out, in order to have a chance at saving said team mate's REAL son. It's a trade that makes a certain kind of sense, but that doesn't really make it feel much better. As Mouse limped away, I wanted to apologize to him. I wanted, really wanted, to take what I'd done back. You don't feel regret too often playing games, but I did.

There's a way in which Mass Effect 2: Dialog Tree reminds me of talking to people in real life, and it's at the heart of that interaction. When we open our mouths, we know what sort of information we want out of the people around us, and we know how we want them to perceive us. Most of the time, we want to be liked. But once the mouth gets moving it can be hard to stop. Give in to a cruel impulse and you might find yourself, seconds later, stepping on a young man's neck. Give in to a kind one and you might save someone from pain, death, or loneliness, without even trying.
Posted by Mike Meginnis