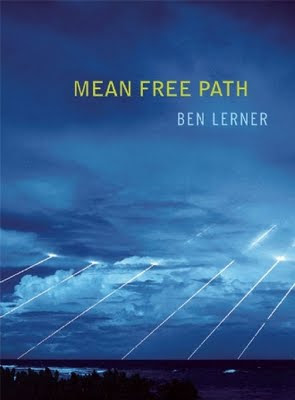 This book has come up a few times for me in the last few weeks.  I bought it during my cross country journey while hating every single book I brought with me.  I had to carry so much stuff and I didn't have any room for anything.  I left a pillow (on purpose), a towel, soap, and shampoo (on accident) in Brooklyn.  I feel like I traded those things for this book.
I saw Evan Lavender-Smith mention Mean Free Path in his Experimental Literature interview at HTMLGiant (which he killed, one of my favorites so far in the series).  He talked about poetry being one of the only avenues of experimental literature. 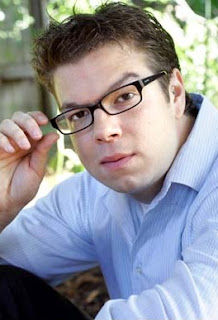 I also talked about Mean Free Path, and Lerner's work in general, with a few Portland poets I met through If Not For Kidnap.  It was pretty good conversation, as all the components were there:  good food, good people, good beer and cocktails (enough to last long into the evening).  The gist of our discussion of Mean Free Path was about the idea of repetition vs revisiting or recontexting language.  I felt that in Mean Free Path the bits of language were not so much being repeated, but recontextualized.
Another thing we talked about was the line breaks.  We all felt they were perfect.  When I read it, I felt like I was reading the reason why line should be broken.  So many good line breaks.  Sometimes I felt like these went hand in hand.  The way the repeated bits of language set me up for an expected outcome, that the language would be a full bit, but it was truncated or broken across the line differently.  Or I was shocked to remember the language, like an echo that took twenty minutes to come back and only after it scared the shit out of me did I remember that I was the one who said it in the first place.
Some of us (not me) felt that the line breaks were too perfect.  They were "crafted".  That Lerner had polished his book to a perfect sheen and that now it was soft, like shiny cheese in the supermarket.  This was actually a refreshing thing to me.  Feeling like I was reading something that took time.  It wasn't accident that brought it to me.  But I see what they mean.  It's a book that is fine tuned, mathematical almost.  Very clean, like a Google server farm.  Too clean.  You can't eat a sandwich in this book.  Too many crumbs.  Someone would shoot you or fire you for doing so, which is what the book is about.  Life is almost being controlled for us.  When Lerner falters, let's a little awareness into the pieces, you see that there is effort in the process, that he knows that this is a poem, that he's using language, that this isn't math and he isn't solving for x, and that he's going to be wrong most of the time.
In an unconscous effort to unify my voice
I swallow gum.  An old man weeps in the airport
Over a missed connection.  The color of money is
Night-vision green.  Ari removes the bobby pins
I remove the punctuation.  Our freezer is empty
Save for vodka and film.  Leave the beautiful
Questions unaswered.  There are six pages left
Of our youth and I would rather swallow my tongue
That waste them on description.

For a good breakdown on the form.
Posted by Robert Alan Wendeborn